I wanted to write about this topic because the day-to-day support that children need during the grieving process is extensive and is required at a time when the other parent (in this instance, me) is at their lowest ebb. One thing that I have learnt in the last six months is that the grieving process is a very individual thing.

What works now for Sam, aged five, and Thomas, aged three, may be different to what works tomorrow, next week, next year. What works for them may not work for another child. I also believe that the challenges I face in supporting the boys after Dunc’s death are different, although inextricably linked, to the challenges I face in grieving for Dunc myself, whilst also parenting them. I may return to that in the future. I want to write about this in the hope that it may help others in a similar situation and provide insight for professionals who are supporting bereaved families. (And, at the back of my mind, I am always mindful of what I write about Sam and Thomas being available to everyone on the internet. I hope that they will not read this in the future and wish I had kept it to myself).

As soon as Dunc died there were big decisions to be made almost immediately. The first was what to say to the boys about the fact that he had died. I was in the fortunate position to have received advice from Winston’s Wish about this in the past (through work). I knew that at three and five years old, the boys’ levels of understanding would be quite different and this proved to be the case. I knew that my wording was important, and had to be clear and direct, so that there was no room for ambiguity. I was also prepared for the fact that children can respond in unexpected ways to news of a death. Therefore, I was not too overwhelmed when Sam said, “So can we have another daddy now then?” within five minutes of me imparting the news. I was keen to tell the boys myself, in the way that I thought was best, and in a calm and comforting manner. I didn’t want them to be frightened and I wanted to start as I intended to go on.

I also had to decide whether to let the boys attend Dunc’s funeral. I took advice from Winston’s Wish and gave the boys the choice. I was keen for them to attend, as I felt that it was an important part of the process of saying goodbye, but I would never have forced them. In order to prepare them for it, I asked them to help me to choose the music, the flowers and their outfits. I took them to the church the night before and talked about the details of the following day. I also took photos of the coffin (with the lid on) when I went to see Dunc at the chapel of rest so that they would know what a coffin looked like.

Before the funeral began, I asked my brother to take a photo of the hearse with the coffin in so that the boys have a record of the occasion. One of the key ways I believe I am supporting the boys is by helping them to keep their memories of Dunc alive. I have made them a photobook each and we have all made memory boxes with important things in that remind us of Dunc. In the summer, we had a ‘Thinking about Daddy’ morning where we got out our boxes and talked about the contents, read the photobooks and drew some pictures of our family. Sam decided to draw a cloud above us for Daddy to sit on. I asked why I couldn’t see him and he told me in despair, “He’s invisible, of course!” We have also blown bubbles to Dunc, and sent him a Star Wars helium balloon on Father’s Day. We have visited the park where he was playing football when he collapsed, at the boys’ request, and his mate has kindly answered Sam’s questions about that evening.

We have received and read many books about death. At one point, a package arrived in the post and Sam exclaimed, “Oh no, Mummy! Not another sad book!” However, both he and Thomas often ask for them to be read. I think such books should come with several health warnings. Firstly, they often have a particular take on the process of death and what happens afterwards. This has to match your own ideas, or the children will become confused. Secondly, it is important to read ahead. For example, one of the books has a small child in it who asks what will happen if mummy dies too. I skipped over this page with the boys until the thought occurred to them anyway, as I didn’t feel I needed to plant the worry in their heads – they had plenty of their own! Thirdly, the books are often quite difficult to read aloud at a time when the adult may be struggling to manage their own emotions. My heart sinks a little when one is chosen from the bookshelf at bedtime, but I appreciate that they can facilitate useful discussion and develop understanding. The boys have certainly taken the characters to heart. Initially, I was a bit confused when Sam said, “Let’s send bubbles to Daddy, Grandad and Badger,” but then realised that he was referring to one of the book characters!

I believe that it is important to show my emotions to the boys, because it helps them to understand that grief encompasses a whole range, and that it is fine to be happy, or sad, and to cry. However, Sam and Thomas had not seen my cry before Dunc’s death and I am wary of worrying them by doing it too often. There is a fine balance to be struck. I try to verbalise how I feel and the boys have come to understand that sometimes I am unintentionally grumpy with them because I am having a sad day. I think this has particularly helped Sam of late, as he has been becoming increasingly angry and has been struggling to express it in an acceptable manner. I have worked hard to reassure him that being angry is normal when someone special has died, but that we have to help him to find an appropriate way to express it.

I have commended both boys for telling me how they are feeling, as I know Sam would be inclined to hide his feelings for fear of upsetting me. I have spent a lot of time after bedtime chatting quietly with him and Thomas individually and they certainly seem comfortable asking me questions, whether they be practical, medical or religious in nature! In addition, both boys are now receiving support from Guy’s Gift, and I hope that the introduction of a third party, and a professional, will help them to be able to express their feelings freely.

On a practical level, I now feel a great responsibility to ensure that the boys get to enjoy the element of physical activity that having a daddy of 6 ft 1″ tall brought, in terms of spinning them round, holding them aloft and generally playing the fool. Whenever I make a den or build an airport out of Lego, I find myself thinking, “This one’s for you, dear!” At the same time, I feel incredibly protective of them. I have become painfully aware that I can not protect them entirely from other people’s occasional insensitivity and lack of understanding, dealing only with the aftermath once I know about the problem.

Dunc and I often talked about how we wanted the boys to grow up, in terms of their values and attitudes. I am trying to ensure that I help them to become robust and decent young men, despite the impact that losing their daddy will inevitably have. I hope that I am continuing their paths in the right direction through supporting them in the ways that I have described above. 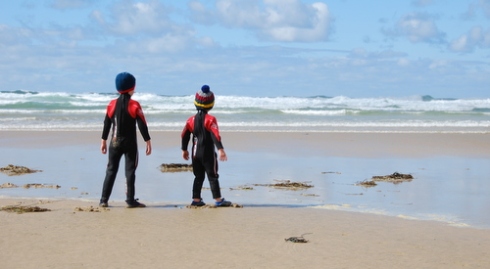 Sam and Thomas in Cornwall, September 2013 – our first family holiday without Dunc.